"We are born with divine light, intuitive wisdom and energy. If we use and nurture this divinity, it will become more potent and dynamic. If not, this divinity will get diminished and mutilated over time".  - Babuji 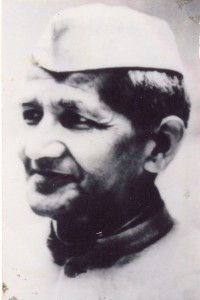 Babuji envisioned and aspired for a classless, corruption and exploitation-free society. He had a firm belief in satyagraha (Insistence or assertion of truth: a mode of political activism based upon patient and compassionate moral persuasion) for sarvodaya (progress and welfare of all). Like Gandhi “Liberation from colonial rule meant little to him if the liberated peoples did not embody a higher morality of justice and compassion”. He did not believe that poor were poor simply because they are reaping fruits of bad actions in previous or present lives. Instead, through his experiences as a lawyer working on behalf of the poor, he understood that widespread poverty is primarily due to systemic exploitation by the powerful and rich classes (हिंदी में बाबूजी की अनुभूतियों, सोच और दर्शन के बारे में यहाँ पढ़ें).

Babuji was member of several governments but he was disinterested in securing political power for personal gain. He also believed that the responsibility of changing our society does not rest on governments alone; everyone including religious leaders, intellectuals, businessmen, managers, and youth need to play their role.

Like Gandhi and Deen Dayal Upadhyay (who provided a critique of both communism and capitalism as well as a holistic alternative perspective for political action and statecraft consistent with the universal needs of the human race and who BJP claims to be the source of their ideological guidance and moral inspiration), Babuji upheld the self-sufficient rural community over the heavily armed and centralized nation-state, cottage industries over big factories, and manual labor over machines that increased unemployment. While Babuji revered Nehru after reading Nehru’s biography in 1936, he didn’t think very highly of Nehruvian focus on industrialization. He had tremendous hope that Charan Singh would be able to put Gandhian economic principles in place (read letters to Charan Singh).

To build an exploitation- and corruption-free society, Babuji used to say that, well informed citizens can not afford to be pessimistic and indifferent to our societal problems.  “It takes just a bit of inoculum (dahi ka khatta) at right temperature to make curd (yoghurt) out of milk” he would say, “We need to start by building our self confidence through study of history, present socio-economic and political systems and then work towards creating awareness in our communities through dialogue. Then, whenever opportunities arise, we should engage in non-cooperation and if needed, outright civil disobedience”.

Babuji considered it crucial that one acknowledges and works on their own personal weaknesses during this process. He would say, “Spiritual practice isn’t for attaining moksha but to be able to address the burning questions of our times”. He questioned how one soul could be truly liberated (attain moksha) when millions of fellow beings are suffering. Therefore, in his quest for social equality and freedom, he used to “challenge” revered religious saints to ask their followers from business communities to help create an exploitation-free society including through abstaining from corruption and adulteration (read his letter to Jain Saint Acharya Tulsi here).

He was born into a Digamber Jain family but he was above any affiliation with respect to orthodoxy (religious belief). Instead, he believed in orthopraxy (correct ethical practice) and practiced the best teachings of all the religions overlooking their the weaker points (read his speech ‘Religion, nation and  us’ here). Babuji used to say that working on individual spiritual realization is not enough to create an exploitation-free society. Individual men and women of character and spiritual realization need to question and work upon the societal ills of their times.

“Enlightened souls are collective heritage of the total human race and do not belong to a single religion. Their teachings have been understood in multiple ways by people. By focusing on weak points of other religions, we can never enhance brotherhood. Friendship and love develop by focusing on the good that each religion offers“. – Babuji

While he did not observe any rituals or liturgy (karam-kand) of Hindu and Jain religion, he ardently put into practice truth & non-violence, the fundamental teachings of Hinduism & Jainism respectively, as a conscientious lawyer, civil disobedience (satyagraha) participant, government leader and family-man.  He was a staunch believer in the equality of all social classes as preached by Islam and he welcomed everyone including dalits in his house. He also practiced forgiveness and compassion, the core teachings of Buddhism and Christianity, in his life. He never ever thought of avenging his political opponents. His political opponents held him in tremendous respect because he always played the role of a conciliatory who tried to bring hearts and minds together instead of isolating anyone. When his family members were angry at anyone, he used to advice them to abstain from making personal comments, soften their language, tone and gestures. He believed that one can prove their point without being harsh to anyone.

©2018 BMCJ Any material on this website may not be published, broadcast, rewritten or redistributed without prior written permission.